Harlan’s scripts for Voyage to the Bottom of the Sea, The Man from U.N.C.L.E, Cimarron Strip, plus the WGA Award-winning “Phoenix Without Ashes” and “Killing Bernstein,” which was originally adaptd for Dark Room.

A new introduction by Patton Oswalt, the voice of Remy in Ratatouille, Grammy-nominated comedian, and author of the New York Times bestseller Zombie Spaceship Wasteland.

“Deeper Than the Darkness” — Ellison’s 90-minute Cimarron Strip teleplay, featuring Jack the Ripper in the Old West, that was famously ruined by the director’s poor grasp of logic.

“Mealtime”—The episode of Voyage to the Bottom of the Sea that resulted in an ABC censor having his pelvis broken by a model of the Seaview. After 47 years, Ellison’s original script finally sees the light of day without the tampering that led to the first appearance of his derogatory Writers Guild pseudonym: “Cordwainer Bird.”

“The Sort of Do-It-Yourself Affair” and “The Pieces of Fate Affair”—Two teleplays from The Man From U.N.C.L.E., featuring Ellison’s original storylines before they were revised for production. These scripts include an editor’s note explaining the scandal that kept the latter episode out of circulation for years. 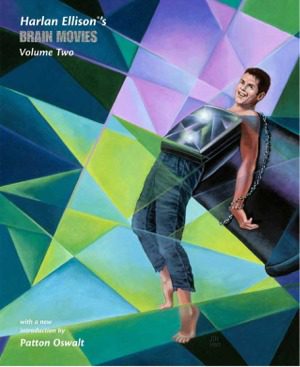