2012 SF Masterworks edition, containing the text of the 35th anniversary edition, with a new introduction.

Introduction, by Adam Roberts
Foreword: Year 2002, by Michael Moorcock
Introduction: Year 2002, by Harlan Ellison
Foreword 1: The Second Revolution, by Isaac Asimov
Foreword 2: Harlan and I, by Isaac Asimov
Introduction: Thirty-Two Soothsayers, by Harlan Ellison
Evensong, by Lester del Rey
Flies, by Robert Silverberg
The Day After the Day the Martians Came, by Frederik Pohl
Riders of the Purple Wage, by Philip Jose Farmer
The Malley System, by Miriam Allen deFord
A Toy for Juliette, by Robert Bloch
The Prowler in the City at the Edge of the World, by Harlan Ellison
The Night That All Time Broke Out, by Brian W. Aldiss
The Man Who Went to the Moon – Twice, by Howard Rodman
Faith of Our Fathers, by Philip K. Dick
The Jigsaw Man, by Larry Niven
Gonna Roll the Bones, by Fritz Leiber
Lord Randy, My Son, by Joe L. Hensley
Eutopia, by Poul Anderson
“A Pair of Bunch”: Incident in Moderan [&] The Escaping, by David R. Bunch
The Doll-House, by James Cross
Sex and/or Mr. Morrison, by Carol Emshwiller
Shall the Dust Praise Thee? by Damon Knight
If All Men Were Brothers Would You Let One Marry Your Sister? by Theodore Sturgeon
What Happened to Auguste Clarot? by Larry Eisenberg
Ersatz, by Henry Slesar
Go, Go, Go Said the Bird, by Sonya Dorman
The Happy Breed, by John T. Sladek
Encounter With a Hick, by Jonathan Brand
From the Government Printing Office, by Kris Neville
Land of the Great Horses, by R.A. Lafferty
The Recognition, by J.G. Ballard
Judas, by John Brunner
Test to Destruction, by Keith Laumer
Carcinoma Angels, by Norman Spinrad
Auto-da-fe, by Roger Zelazny
Aye, and Gomorrah…, by Samuel R. Delany

Contents courtesy of Tim Richmond’s FINGERPRINTS ON THE SKY. 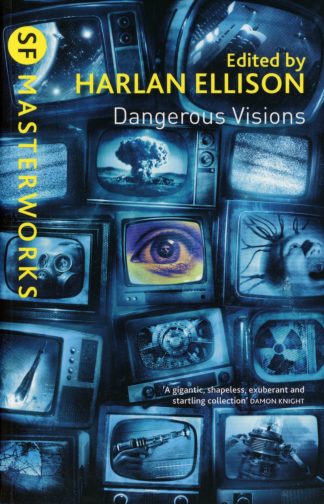