This is the second volume in Pyramid Books’ exciting program of Harlan Ellison titles. Out of print since 1969, PAINGOD brings together eight tales of wonder from a universe of thoughts never thought before…the universe of might-be. To make this collection a must-buy for the enormous audience that never seems to get enough of Ellison’s wild imagination, a new introduction has been especially written and the author has included one of his most recent works, “Sleeping Dogs,” never before anthologized anywhere. In this amazing little book you will encounter the now-famous
Harlequin and his nemesis, The Ticktockman, in a story that has become one of the most reprinted stories in the English language; a planet of righteous lunatics who spend all their waking hours making asses of themselves; a spaceship filled with hideous mutants rejected by the world that gave them birth; a pyrotic who can set fires merely by willing them into being; the last surgeon in a world of “phymechs,” robot physicians. In short, once having taken a toke of Ellison you will be hooked for good, so go cautiously: this is the mad dreamer at his best. 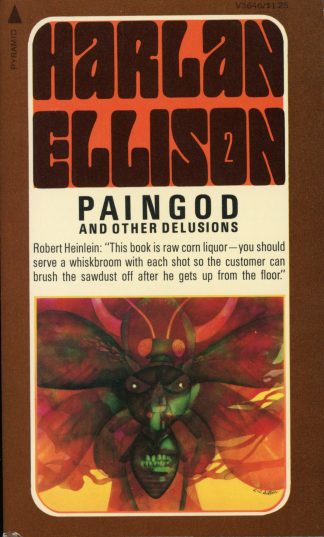