The New York Times called him “relentlessly honest” and then used him as the subject of its famous Sunday Acrostic. People magazine said there was no one like him, then cursed him for preventing easy sleep. But in these stories Harlan Ellison outdoes himself, rampaging like a mad thing through love (“Cold Friend,” “Kiss of Fire,” “Paulie Charmed the Sleeping Woman”), hate (“Knox,” “Silent in Gehenna”), sex (“Catman,” “Erotophobia”), lost childhood (“One Life, Furnished in Early Poverty”), and into such bizarre subjects as the problems of blue-skinned, eleven-armed Yiddish aliens, what it’s like to witness the end of the world and what happens on the day the planet Earth swallows Barbra Streisand. Oh yeah, this one’s a doozy!

The complete table of contents of the 1984 Bluejay Special Edition of APPROACHING OBLIVION, including later revisions by the author from subsequent short story appearances.

Selling Oblivion: 1974-1984
A compendium of Ellison-written cover copy for 10 years’ worth of APPROACHING OBLIVION reissues.

Dostoevsky Never Wrote for Tony Either, So Get On with Your Life (previously uncollected)
Ellison’s 1999 essay on getting published in The Magazine of Fantasy & Science Fiction.

RIF (previously unpublished)
A 1971 prospectus for an abandoned novel.

The Song of the Soul
The introduction to Ellison’s 1971 retrospective, ALONE AGAINST TOMORROW.

Ellison Speaks… (previously uncollected)
An edited compilation of two 1972 letters and a recorded interview on writing prose and for the screen.

You Are What You Write (previously uncollected)
The second of Ellison’s trilogy of essays featured in the three CLARION anthologies edited by Robert Scott Wilson.

Breaking and Entering Pandora’s Box (previously uncollected)
A humorous intro to an apocalyptic story from an unusual perspective. 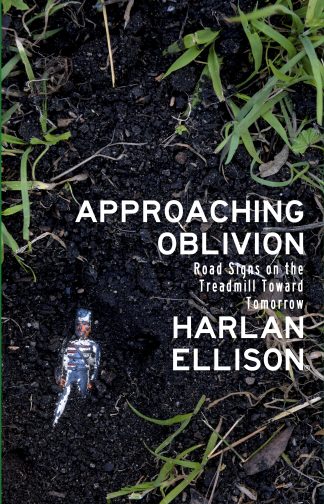