N.B. The columns in this volume were previously collected in the 2016 first edition of THE LAST PERSON TO MARRY A DUCK LIVED 300 YEARS AGO. If you have that book (and HARLAN 101, for the Writing columns), there’s NO reason to purchase this volume unless you are a completionist. You have been warned.

First came The Glass Teat, next the Harlan Ellison Hornbook, then An Edge in My Voice, and, finally, Harlan Ellison’s Watching—but now, Harlan Ellison presents not one, not two, not three, not four, but five complete columns in one book: Writing, The Streets, Ask Uncle Harlan, The Pitch, and I Had a Thought Today…, in which vital questions are considered:

How many dumps has he taken unwillingly? How many “Oh, Kriiiiste, it’s the Killer Croc in that crane and here comes the fuckin’ wrecking ball!!!!??” How many biscuits? How many yello-mellos? How often the ooo, whooops!?

I don’t care how good you are, how much money you have, how many times your suave alter-ego has gotten laid by starlets, how much Pilates you do, how buff you are, how many chunks of metal you’ve got replacing your arms, legs, liver, or spleen…I don’t give a damn how athletic you are, how lucky you are, how adept and sinewy and flexible you are…Jack, don’t tell me that looking up from the bloody deck and seeing a twelve-foot-high, drooling, snakeskin, mass murderer with the moves of a Sonny Chiba and an intestine- festooned pickaxe lunging over you…

You do not piss yourself !

This guy leads a life that would make a sandworm whiz.

What the hell does Batman do with his smelly tighty-whiteys?

Note: We should probably mention that none of the columns in question lasted longer than four installments, but one outlasted its venue.

Only 3 left in stock (can be backordered)

N.B. This is a pre-order. We hope to have the book in stock by mid-July 2020. It’s entirely possible we’ll  have it earlier, but given the uncertainties abounding at the moment, it could be later. 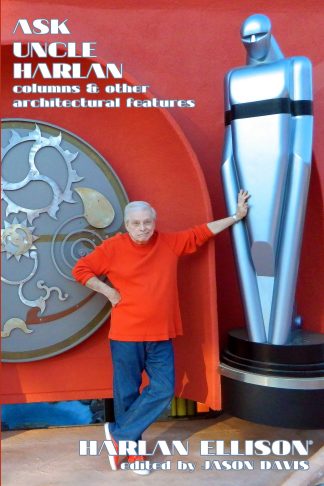