This is a pre-order item. This book–and any items purchased in the same order–will ship when this book is published. We are estimating a publication date of mid-February 2021, but hope to have the books in hand earlier.

These are stories of juvenile delinquents, bopping gangs, switchblade street thugs whose direct lineal descendants roam the nights in every major American city from New York to San Francisco. It’s a book that first saw issue in 1958, when kid gangs ruled the stoops and sidewalks of every urban ghetto. But Ellison has updated the book to match the times: while it’s true the gangs are back in Pittsburgh and Detroit, Washington D.C. and Denver, the author has drawn a shockingly obvious line from the punks of the Fifties to the street criminals of
today, creating a package of paralyzing panic that reflects not only
where we are today in terms of fear…but where we came from…how we got here…crouched in our little rooms with triple locks on the doors.

Cover photograph from the collection of Harlan Ellison.

Story Introductions: 1958
Ellison-written commentary on eleven stories from the first edition of THE DEADLY STREETS (Ace Books, 1958). Unseen since they were dropped from the 1975 Pyramid reissue.

Tightrope (previously unpublished)
An unpublished Ellison short story originally intended for the 1958 edition of THE DEADLY STREETS, but dropped at the last minute because the magazine that purchased it failed to debut the story before the collection went to print. Includes Ellison’s 1958 introduction. 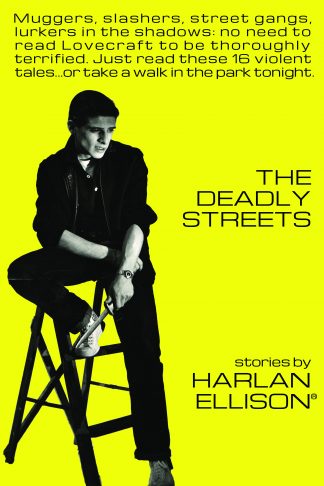