This is a pre-order item. This book–and any items purchased in the same order–will ship when this book is published. We are estimating a publication date of mid-February 2021, but hope to have the books in hand earlier.

History will surely agree that America’s most destructive contribution to 20th Century living has been that damaged product called plastic romance. It twists and savages us. After a lifetime of lies about what love is supposed to be, are you finally angry and depressed enough to be part of a “recall” on that shabby, mildewed merchandise? If so, join the remarkable Harlan Ellison as he dissects the soul and body of love in Our Time. In 15 scalpel-sharp stories that range from the legalized whorehouses of Nevada to the deadly streets of New York City, from the abortion mills of Tijuana to the sound stages of Hollywood, the writer whom Oui magazine charmingly named “the perpetually angry young punk of the bizarre” rips the Saran-Wrap off love and hate and sin and twittering passion…to disclose the raw meat beneath. He presents a world of hearts&flowers guaranteed to revise your thinking about where love is found and how it looks.

The complete table of contents of the 1997 EDGEWORKS, Volume 4 version of LOVE AIN’T NOTHING BUT SEX MISSPELLED, including later revisions by the author.

Dial 9 to Get Out by Jason Davis
An original essay detailing the history (and lengthy pre-history) of Ellison’s tenth short story collection, its widely varying tables of contents, and the mainstream novel that never was.

Selling Love/Sex: 1963-1997
A compendium of Ellison-written cover copy for 57 years’ worth of LOVE AIN’T NOTHING… reissues, including the earliest incarnation conceived five years before the book was published.

Trident Press Author’s Questionnaire (previously unpublished)
The original publisher asked Ellison to fill in an eight-page survey gathering information on both author and Book for marketing purposes. Harlan did the survey…and some of his answers made the thing worth publishing.

1963 Preface: Some Straight Talk from Uncle Harlan (previously unpublished)
Ellison’s 1963 introduction to the first incarnation of LOVE AIN’T NOTHING BUT SEX MISSPELLED–his resume for writing the book.

1968 Preface: Motherhood, Apple Pie & the American Way
Ellison’s 1968 introduction to the Trident Press edition of LOVE AIN’T NOTHING…, written at the editor’s behest, and omitted from all editions following the 1976 Pyramid reissue.

The Music of Our Affair
A 1962 Ellison short story originally intended for LOVE (and mentioned in the ’63 preface), that was dropped from the ’68 table of contents and never restored to its proper home. Having previously been collected in AGAIN, HONORABLE WHOREDOM AT A PENNY A WORD (2014), it appears here with its author’s note for the first time.

Two treatments for My Name Is Adam (previously unpublished)
Written for a television show that never made it to series, these outlines were adapted from the short story “Riding the Dark Train Out” and served as the inspiration for “A Prayer for No One’s Enemy,” respectively.

Moonlighting (previously unpublished)
The 20 October 1984 treatment from which the Scene of the Crime teleplay (see above) was developed.

Dealing with the Lot of Y’all, Part One
The introduction to EDGEWORKS, Volume 4, which contained the final incarnation of LOVE AIN’T NOTHING… Part Two, destined for Volume 5, was never written. 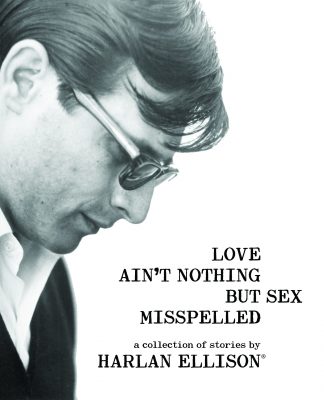