This is a pre-order item. This book—and any items purchased in the same order—will ship when this book is published. We are estimating a publication date of late-May 2021, but hope to have the books in hand earlier.

In Rusty Santoro’s neighborhood, the kids carry knives, chains, bricks. Broken glass. And when they fight, they fight dirty, leaving the streets littered with the bodies of the injured and the dead. Rusty wants out—but you can’t just walk away from a New York street gang. And his decision may leave his family to pay a terrible price.

“Harlan Ellison is the dark prince of American letters, cutting through our corrupted midnight fog with a switchblade prose. He simply must be read.”
PETE HAMILL

“One of the best writers in the world.”
ISAAC ASIMOV

First published more than half a century ago and inspired by the author’s real-life experience going undercover inside a street gang, WEB OF THE CITY was Harlan Ellison’s first novel and marked the long-form debut of one of the most electrifying, unforgettable, and controversial voices of 20th century letters.

Appearing here for the first time together with the aborted screenplay Ellison adapted from his debut novel in the early ’60s, WEB OF THE CITY offers both a snapshot of a lost era and a portrait of violence and grief as timely as today’s most brutal headlines.

This new Edgeworks Abbey Archive edition contains the complete table of contents of the 1983 Ace Books edition of WEB OF THE CITY.

Selling Santoro
A compendium of Ellison-written copy for 63 years’ worth of RUMBLE/WEB OF THE CITY reissues.

Setting the Record Straight (previously unpublished in its entirety)
A 1992 letter Ellison wrote to Gary Lovisi of Paperback Parade, chronicling the writing of WEB OF THE CITY. Portions of that letter were excerpted for the March 1992 issue of that publication, but the entire letter appears herein.

Rumble (previously collected in the limited edition of BRAIN MOVIE, Vol. 7)
Harlan Ellison’s aborted screenplay adaptation of WEB OF THE CITY, to have been produced by AIP with Frankie Avalon and Annette Funicello. 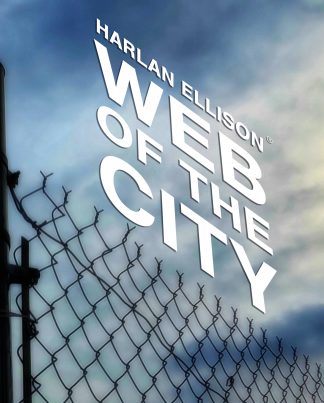