Presenting Harlan Ellison’s first novel, back in print for the first time in thirty years, and backed with three thematically linked short stories: No Way Out (1957), No Game for Kids (1959), and Stand Still and Die! (1956).

In Rusty Santoro’s neighborhood, the kids carry knives, chains, bricks. Broken glass.  And when they fight, they fight dirty, leaving the streets littered with the bodies of the injured and the dead.  Rusty wants out – but you can’t just walk away from a New York street gang. And his decision may leave his family to pay a terrible price.

First published more than half a century ago and inspired by the author’s real-life experience going undercover inside a street gang, Web of the City was Harlan Ellison’s first novel and marked the long-form debut of one of the most electrifying, unforgettable, and controversial voices of 20th century letters.

Appearing here for the first time together with three thematically related short stories Ellison wrote for the pulp magazines of the 1950s, Web of the City offers both a snapshot of a lost era and a portrait of violence and grief as timely as today’s most brutal headlines. 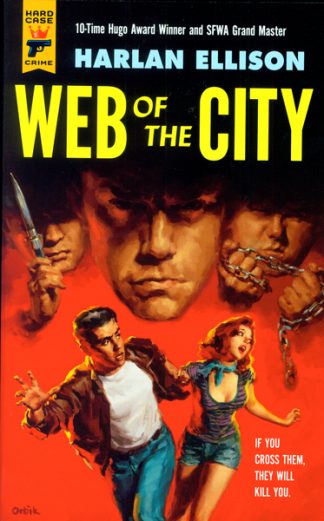