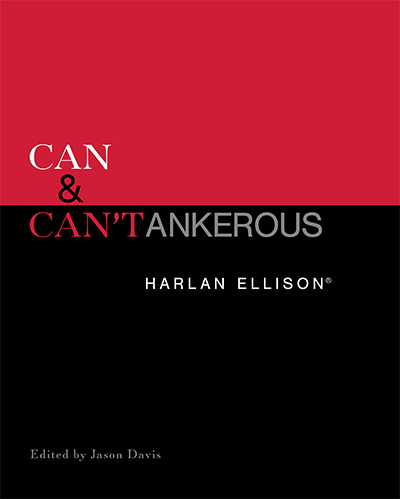 Available for the first time in paperback!

From the 1999 Chris Carter-prompted sf-noir, “Objects of Desire in the Mirror Are Closer Than They Appear,” to last year’s enigmatic blend of fact and fiction, “He Who Grew Up Reading Sherlock Holmes,” CAN & CAN’TANKEROUS gathers ten previously uncollected tales from the fifth and sixth decades of Harlan Ellison’s professional writing career, a work-in-progress now encompassing over 100 books.

In the eighteen years since his last all-new collection, SLIPPAGE, Ellison’s continued to expand the frontiers of his inimitable oeuvre with tales that force his readers’ imaginations to the edge of conception while simultaneously plumbing the depths of their souls: a second entry in his (now) ongoing abcedarian sequence; a “lost” pulp tale re-cast as a retro-fable; a melancholy meditation for departed friend and fellow speculative fiction legend, Ray Bradbury; a 2001 revision of a 1956 original; an absurdist ascent toward enlightenment (or its gluten-free substitute); a 200-word exercise in not following the directions as written (with a special introduction by Neil Gaiman that weighs in at four times the word count of its subject); a fantastical lament for a bottom-line world; and—at no extra cost—the 2011 Nebula Award-winning short story “How Interesting: A Tiny Man.”

Strokes be damned! Ellison’s still here! HE’s still writing! And with more new books published in the last ten years than any preceding decade of his career, his third act is proving to be the kind other living legends envy.