Produced and Directed by Erik Nelson.

Crackling with infectious energy, DREAMS WITH SHARP TEETH pays homage to the dark prince of American letters, Harlan Ellison. Master of his craft, Ellison has heroically produced over 75 books and more than 1,700 classics of fiction and non-fiction on one of his Olympia manual typewriters, including the single most popular Star Trek episode ( City on the Edge of Forever ) and brilliant, award-winning short stories, some written in bookstore windows, on very public display.

The film draws on over 25 years of exclusive video footage that captures
Ellison at his most inspiring and irritating, curmudgeonly and lovable. See Ellison rant about the idiocies of geekdom, confess to mailing a dead gopher to an executive at a publishing house, recall his tortuous childhood, and speak about the joy (and craft) of writing. The film features candid interviews with famous and surprising friends, including actor Robin Williams, author Neil Gaiman and Ron Moore (Battlestar Galactica), who flesh out Ellison s prodigious contributions to the worlds of literature and popular culture, as well as their very personal encounters with this unique Force Of Nature.

Whether a die-hard Ellison fan or someone tragically uninitiated, DREAMS WITH SHARP TEETH will amuse, inspire, infuriate, and edify.

Only 3 left in stock

An Evening with Dreams with Sharp Teeth: The Film’s Premiere

NOTE: A Remastered DVD was released by Cinedigm in 2018. 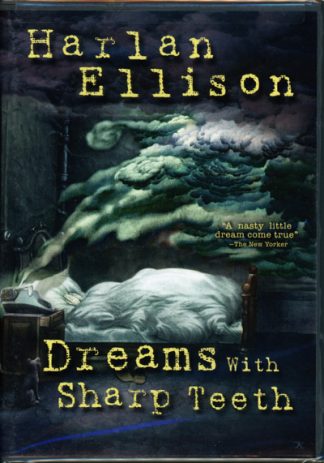