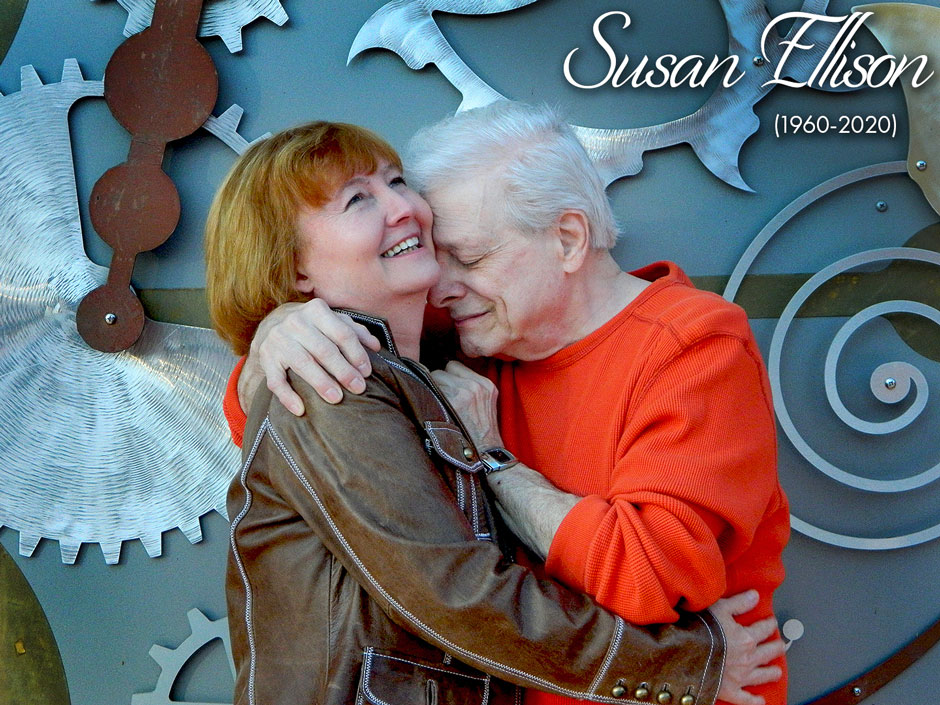 We are deeply saddened to inform you that Susan Ellison, the Electric Baby,
passed away this weekend at home in the Lost Aztec Temple of Mars.
In lieu of inadequate words, we offer Harlan’s story, “Susan”…

As she had done every night since they met, she went in bare feet and a cantaloupe-meat-colored nightshift to the shore of the sea of mist, the verge of the ocean of smothering vapor, the edge of the bewildering haze he called the Brim of Obscurity.

Though they spend all their daytime together, at night he chose to sleep alone in a lumpy, Volkswagen-shaped bed at the southernmost boundary of the absolutely lovely forest in which their home had been constructed. There are the border between the verdant woods and the Brim of Obscurity that stretched on forever, a sea of fog that roiled and swirled itself into small, murmuring vortexes from which depths one could occasionally hear something like a human voice pleading for absolution (or at least a backscratcher to relieve this awful itch!), he had made his bed and there, with the night-light from his old nursery, and his old vacuum-tube radio that played nothing but big-band dance music from the 1920s, and a few favorite books, and a little fresh fruit he had picked on his way from the house to his resting-place, he slept peacefully every night. Except for the nightmares, of course.

And as she had done every night for the eight years since they had met, she went barefooted and charmed, down to the edge of the sea of fog to kiss him goodnight. That was their rite.

Before he had even proposed marriage, he explained to her the nature of the problem. Well, the curse, really. Not so much a problem; because a problem was easy to reconcile; just trim a little nub off here; just smooth that plane over there; just let this big dangle here and it will all meet in the center; no, it wasn’t barely remotely something that could be called “problem.” It was a curse, and he was open about it from the first.

“My nightmares come to life,” he had said.

Which remark thereupon initiated quite a long and detailed conversation between them. It went through all the usual stages of good-natured chiding, disbelief, ridicule, short-lived anger at the possibility he was making fun of her, toying with her, on into another kind of disbelief, argument with recourse to logic and Occam’s Razor, grudging acceptance, a brief lapse into incredulity, a return to the barest belief, and finally, with trust, acceptance that he was telling her nothing less than the truth. Remarkably (to say the least) his nightmares assumed corporeal shape and stalked the night as he slept, dreaming them up. It wouldn’t have been so bad except:

“My nightmares killed and ate my first four wives,” he had said. He’d saved that part for last.

But she married him, nonetheless. And they were extremely happy. It was a terrific liaison for both of them. But just to be on the safe side, because he loved her very much, he took to sleeping in the lumpy Volkswagen bed at the edge of the forest.

And every morning–because he was compelled to rise when the sunlight struck his face, out there in the open–he would trek back to their fine home in the middle of the forest, and he would make her morning tea, and heat and butter a muffin, or possibly pour her a bowl of banana nut crunch cereal (or sometimes a nice bowl of oatmeal with cinnamon or brown sugar sprinkled across the surface), and carry it in to her as she sat up in bed reading or watching the Home Shopping Channel. And for eight years she had been absolutely safe from the nightmares that ripped and rent and savaged everything in sight.

He slept at the Brim of Obscurity, and he was a danger to no one but himself. And whatever means he used to protect himself from those darktime sojourners, well, it was an armory kept most secret.

That was how they lived, for eight years. And every night she would go barefoot, in her shift, and she would follow the twenty-seven plugged-together extension cords–each one thirty feet long–that led from he house to his night-light; and she would come to him and kiss him goodnight. And they would tell each other how happy they were together, how much every moment together meant to them, and they would kiss goodnight once more, and she would go back to the house. He would lie reading for a time, then go to sleep. And in the night, there at the short of fog, at the edge of the awful sea of mist, the nightmares would come and scream and tear at themselves. But they never got anywhere near Susan, who was safely in her home.

So as she had done every night since they had met, she followed the extension cords down through the sweet-smelling wind-cooled hedges and among the whispering, mighty trees to his bed. The light was on, an apple ready to be nibbled sat atop a stack of books awaiting his attention; the intaglio of a tesseract (or possibly a dove on the wing) lay in the center of a perfectly circular depression in his pillow where he had rested his head. But the bed was empty.

She went looking for him, and after a time she found him sitting on the shore of fog, looking out over the Brim of Obscurity. But she heard him crying long before she saw him. The sound of his deep, heartfelt sobbing led her to him.

And she knelt beside him, and he puts his arms around her, and she said “I see now that I’ve made you unhappy. I don’t know how, but I can see that I’ve come into your life and made it unpleasant. I’m sorry, I’m truly sorry.”

But he shook his head, and continued to shake it, to say no…no, that isn’t it…you don’t understand.

“I’m so sorry…” she kept saying, because she didn’t understand what it meant, his shaking his head like that.

Until, finally, he was able to stop crying long enough to say, “No, that isn’t it. You don’t understand.”

“Then what are you crying about?”

He wasn’t able to tell her for a while, because just trying to get the words out started him up all over again. But after a while, still holding her, there at the Brim of Obscurity (which, in an earlier time, had been known as the Rim of Oblivion), he said softly, “I’m crying for the loss of all the years I spent without you, the years before I met you, all the lost years of my life; and I’m crying that there are less years in front of me than all those lost years behind me.”

And out in the roiling ocean of misty darkness, they could both hear the sound of roving, demented nightmares whose voices were now, they understood, less filled with rage than with despair.

“Susan” by Harlan Ellison, copyright 1993 by The Kilimanjaro Corporation.