Spider Kiss
The gritty, rockabilly novel that drops the word on Stag Preston in the legendary, formative years of rock & roll, Spider Kiss will suck your socks off. This electrifying novel of the early days of rock & roll takes no prisoners as it runs an eye over this nice kid from Louisville with a voice straight out of heaven…and the demon Success on his back…and follows him down, down, down into a velvet-lined hell where nobody’s grass is greener. According to premiere rock critic Greil Marcus of Rolling Stone, this is the best rock novel ever written! (A copy of the first edition in mint condition holds a place of honor in the rock and Roll Hall of Fame in Cleveland.) The novel complete, for the very first time.

Stalking the Nightmare
Pure, 1000-proof distillation of Ellison. A righteous verbal high! Here you’ll find twenty of his very best stories and essays (including the four-part Scenes from the Real World), an anecdotal history of the doomed tv series, The Starlost, he created for NBC; Tales from the Mountains of Madness; and his hilariously brutal reportage on the three most important things in life: sex, violence, and labor relations. With a knockout, an absolutely killer, Foreword by Stephen King.

Here’s what Greil Marcus, America’s most distinguished rock critic, says about Spider Kiss:
“Harlan Ellison’s SPIDER KISS, first issues in 1961 as ROCKABILLY, was the first, and it’s still the best. At once a roman à clef, a trash rock novel, a prescient version of Elvis: What Happened?, and a true look at the sources of American culture, it chronicles the rise-and-inevitable-fall of a Southern flash. Characters include a soul-searching flack (the narrator), a Colonel Tom-style manager, and Stag Preston né Luther Sellers, a rockabilly hero who is not only a great big hype but a natural artist whose genius no evil , including his own, can ever quite snuff. Out of these materials comes a story that makes sense, and an ending with some real tragedy in it.” 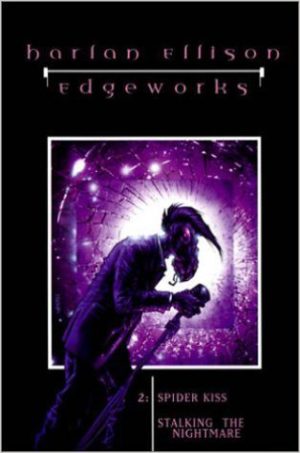