BLOOD’S BARGAINs  are books that have sustained cosmetic damage but are still readable. From badly aligned spines and miscut covers to serious bumps, bruises, scuffs, and third-party stickers, think of these as books Blood salvaged from the post-apocalyptic wastes in an effort to civilize Vic.

“Some years ago I was approached by the distinguished sf author Barry Malzberg and the editor of The Magazine of Fantasy & Science Fiction, Edward Ferman, to contribute a new story to “the ultimate science fiction anthology,” Final Stage. It was to be a collection of stories that were the final word, the absolute envelope-straining outer limit on a variety of themes: the ultimate time-travel story, the ultimate robot story, the ultimate alien-invasion story. And like that. Barry and Ed assigned me the task of writing “the ultimate science fiction sex story.” I wrote “Catman.” Was it as dramatic as the editors desired? When the book was reprinted in Italy, Spain, Germany, Japan, and half a dozen other countries, the only story the overseas publishers would not include, at risk of being a deal-breaker, was “Catman.” In two parts, adapted by the brilliant Peter David of Hulk, Star Trek, Sachs & Violens, and Aquaman fame, exquisitely and mature-adultly painted in full glowing living color by Mike Deodato, Jr. (Wonder Woman, et al), this is my “Catman” brought pulsing from the mind’s eye to the printed page. Part two is in this issue, along with “How’s the Night Life on Cissalda?”, which has been rendered in adaptation by Faye Perozich — who had three scripts in our Special — and painted by the astonishing artist Eric White, whose covers have been seen on Time, GQ, and Playgirl. Of this story, Truman Capote said, “Ooh, I love it; what a nasty, dirty little story!” This is, of course, our demented sexual orgy issue. Fun for the entire family. (And, as usual, the usual interstitial pages created by me, Harlan, and rendered by him, Eric Shanower.) The usual new story, written this time around a knockout Ron Brown sorta kinda Sinbad-battling-the-roc cover. And the first installment of our new letter column, imaginatively titled “A Letter Column,” wherein fools will be upbraided in effusive and elegant prose. Can such wonders be? Can one afford to miss it? I bloody well think not.” — Harlan Ellison 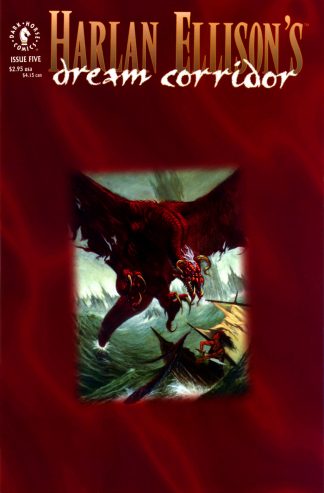