HONORABLE WHOREDOM AT A PENNY A WORD restores to print fourteen Harlan Ellison tales from the first dozen years of his career. None of these stories have ever appeared in an Ellison collection and one (or two, depending on how you count) have never been published before.

“The Golden Virgin”
“Scum Town”
“They Killed My Kid!”

Big John Novak, Ellison’s under-four-foot-tall private detective, was intended to be crime fiction’s first diminutive protagonist, but the author only wrote the one story—“Can Opener” (immortalized in a 1993 instalment of Harlan Ellison’s Watching where the commentator referenced a story with a midget protagonist before exclaiming “I’m five-foot-five; I’m a little person! You’re a midget!” at the politically correct viewer).

EXPLORE ELLISON’S WRITING PROCESS: “The Honor in the Dying” was originally published in a 1960 issue of The Saint Mystery Magazine, but there was an earlier—very different version—of the story from 1957 that has never been released from Ellison’s files. Now, the two versions of the story are presented together, allowing an unprecedented look at the author’s creative process at the outset of his writing career.

A NEVER-BEFORE-PUBLISHED ELLISON RARITY FROM 1957: “The Final Movement” was discovered on a 53-year-old inventory of Ellison’s stories. “Unsold” was scribbled alongside the title, and so it remained unpublished…until now.

ALL THE ABOVE, PLUS NINE MORE NEVER-BEFORE-COLLECTED TALES, INCLUDING:
A hard-boiled novelette “Burn My Killers!” that was written overnight for $180.
The men’s adventure “Death Climb,” which earned Ellison his appearance in an oversized, slick magazine.
Ellison’s attempt to outwit the pathological re-titling of editor W.W. Scott: “Thrill Kill,” which Scott renamed “Homicidal Maniac.”
A rare Ellison Western, “Saddle Tramp,” starring a topless bandit who meets her match.
The jazz tragedy “Riff.”
A lurid night on the town in “Kill Joy.”
Vegas-tainted torment in “Girl at Gunpoint.”
Beachfront bloodshed in “Knife/Death.”
And finally, a nasty little punch to the gut called “Mac’s Girl.” 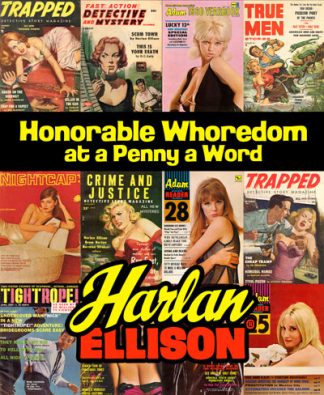