This is where it all started: the first book written by the controversial author of MEMOS FROM PURGATORY and PAINGOD. A stunning novel of street violence based on Ellison’s underground days in a kid gang!

The guy in the photo, smoking the pipe and wearing the newsboys’ cap is Harlan Ellison. The photo was taken at a seminar he recently led at UCLA in Los Angeles. The week the picture was snapped, he was awarded an honorary degree for the excellence of his fantasy writings. Some smartass might even call him “Dr.” Ellison. But only once. Because even though Ellison has come a long way since he started writing in the Fifties, he’s still the street fighter who assumed a phony name and joined The Barons, the toughest gang of juvenile delinquents in Brooklyn’s Red Hook area, just so he could write a novel about life in the slums. The real-life story of those ten weeks in hell was recently published, MEMOS FROM PURGATORY (pyramid Book V3706). But the actual novel that came out of that period has been out-of-print for twelve years. Now, with its original title restored, Pyramid Books is pleased to reissue WEB OF THE CITY, the 10th volume in the uniform series of books by a streetwise “Dr.” who risked his tail and talent to write about the dark underbelly of city life. 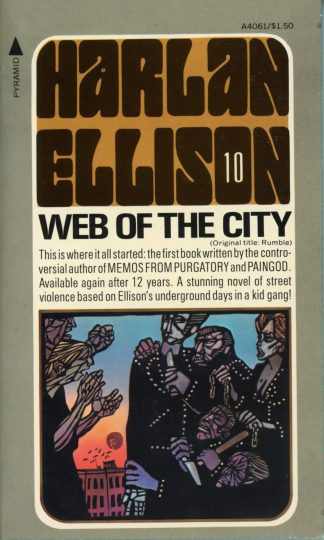